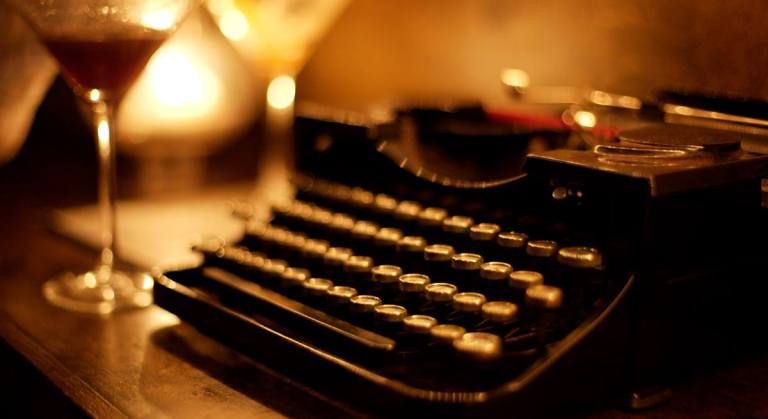 “She sat amid the clutter of life, buried in the back of an old half-finished basement/root cellar, breathing in the damp sand and years of dust, unaware of anything other than the next word on the page as she pressed the round metal keys methodically with her strong young fingers. The slow but steady clack, snap, clack, snap, clack, snap of the aging typewriter filled the small cemented box with more noise than it had held in years. Its cool dark corners being exposed to harsh lamplight, frightening away the variety of six and eight-legged residents, and bathing the writer in sparkling amber dust motes each time she fidgeted on the tall padded bar stool. The newly handmade, heavily varnished drafting table gleamed in that light, making the dingy shelves and sagging edged boxes spaced around the room appear weathered and ancient by comparison. It was her refuge away from prying eyes and a noisy family that constantly picked at her highly distracted mind, a place where no one ventured unless they had no other choice.

She rolled a new page of neon orange paper into the machine, looked down at the pile of turquoise and purple notebook paper covered in large looping cursive and began again. The story of Rick and Rebekah’s budding romance pulled her back into a place of contentment and safety.”

It’s remarkable how cathartic the writing process can be for me. Stressful day? Write it away. Miffed at the world? Battle it out on the page. Gloomy weather got me down? Fantasy land is just a keyboard away. I suppose it has always been that way. I was an emotional child who tended to wear her heart on her sleeve. So writing was an escape. As a teenager most of my fears and woes could be solved on paper. I wrote angst-ridden poetry and love stories mostly, being a completely average girl back then, and the occasional dream/nightmare turned story. I wrote from the need to pour out the feelings that threatened to overwhelm me. I wrote until it became a habit. Then I wrote because I couldn’t imagine not writing.

I’d like to say that as an adult I no longer need the catharsis. Of course, I would be bald-faced lying if I did. In fact, I actually am more productive in my writing when my life feels like it’s in upheaval, more than any other time. I laugh about it often, because I really hate drama. But I seem to need drama in my life, to put drama on the page. Irritating neighbor that never cleans up after her dogs? Chapter eleven makes its debut. Having to tow people who park across my driveway EVERYDAY? Oh look, a war broke out between good and evil in Chapter twenty! There’s enough drama in my life to write a dozen books and I have the cortisol levels to prove it! So I guess I should be thankful for it all, the annoying to the horrible, because it means I get to do something I can’t imagine my life without, write stories.

This entry was posted in Life, The Writing Process.